When faced with breast cancer, you need high-quality care delivered with compassion and confidence. Broward Health’s breast oncology division will work closely with you to choose a treatment approach that works to provides the best chance of controlling your cancer, preserving function, and reducing the risk of recurrence.

We are dedicated to caring for each patient under a multidisciplinary medical team making individualized decisions for your type and stage of breast cancer. The multidisciplinary team meets regularly to review new or challenging breast cancer cases in depth and reach a consensus on treatment strategies. Through this coordinated approach, we strive to offer the most thorough and personalized care, as well as access to innovative therapies for your cancer.

Breast cancer symptoms vary from person to person and there is no exact definition of what a lump or mass feels like. The best thing to do is to be familiar with your breasts so you know how “normal” feels and looks. If you notice any changes, tell your doctor. While regular self-exams are important, many breast cancers are found through regular screening mammograms before any symptoms appear.

Breast cancer symptoms may include:

These symptoms do not always mean you have breast cancer. However, it is important to discuss any symptoms with your doctor since they may also signal other health problems.

If you notice changes to your breasts, experience symptoms of breast cancer, or have an abnormal mammogram result, your doctor will need to investigate further to make a diagnosis. Your doctor may start by performing a breast exam, which involves manually checking your breasts and armpit for lumps and abnormalities. If your doctor suspects breast cancer, they may order imaging tests to take a better look.

Imaging
Most breast imaging is carried out with a mammogram or ultrasound.

Occasionally, doctors will use magnetic resonance imaging (MRI) or other specialized examinations.

Biopsy
If the imaging exam shows an unusual or suspicious mass or skin thickening, doctors will need a tissue sample to make a definitive diagnosis. The process of retrieving and examining this tissue under a microscope is called a biopsy.

For breast cancer, patients usually undergo an image-guided core needle biopsy. During this procedure, a live image of the breast tissue is used help doctors guide the needle to the suspected cancer tissue.

If the biopsy reveals cancerous tissue, additional images and biopsies may be needed to determine the exact scope of the disease. This part of the diagnosis shows whether the cancer has spread to nearby lymph nodes or other parts of the body.

Molecular diagnosis
If the patient is diagnosed with breast cancer, doctors will also analyze the cancer cells to determine the disease’s molecular receptor subtype. By understanding the subtype, they can develop a comprehensive, personalized treatment plan.

Broward Health and the Lillian S. Wells Women’s’ Health Center provides multidisciplinary care. As a cancer patient, a medical oncologist, radiation oncologist, surgical oncologist, and reconstructive surgeon work together as a team to achieve the best possible outcome for you. They coordinate care and develop a comprehensive treatment plan that’s unique to each patient’s disease and needs.

Surgery
Many patients undergo some form of surgery as part of their breast cancer treatment.

Some will receive chemotherapy or targeted therapy before surgery. The goal of these treatments is to shrink the tumor and affected lymph nodes to make the procedure and recovery easier on the patient. This also allows the treating team to assess how cancer has responded to treatment, which can be important for some breast cancer subtypes.

There are two categories of breast cancer surgery:

In some cases, both breasts are removed (double mastectomy). This can help prevent the development of new breast cancer. It is typically done for patients who have an elevated risk of developing breast cancer due to family history or their own genetic profile, such as a BRCA mutation.

In both lumpectomies and mastectomies, surgeons may also remove nearby lymph nodes. Breast cancer can spread through nearby lymph nodes. Doctors will study the ones that are removed to determine if there are cancer cells within the nodes. This information can help determine the risk of the disease spreading to distant organs, as well as the need for chemotherapy and radiation therapy.

Like all surgeries, breast cancer surgery is most successful when performed by a specialist with a great deal of experience in a particular procedure. Here at Broward Health we have specialist breast cancer surgeons that perform surgery using the least-invasive and most-effective techniques.

In metastatic breast cancer cases, radiation therapy can also be used as a palliative treatment to reduce symptoms caused by cancer spreading to other parts of the body and improve the patient’s quality of life.

There are different techniques used in radiation therapy. Your doctors and radiation oncologist will collaborate to make sure you receive the most effective and precise dose of treatment.

Targeted therapy
Cancer cells rely on specific molecules (often in the form of proteins) to survive, multiply and spread. Targeted therapies stop or slow the growth of cancer by interfering with, or targeting, these molecules or the genes that produce them.

In recent years, targeted therapy has become a major weapon in the fight against breast cancer. Breast cancer subtypes that once had poor prognoses are now highly treatable.
One type of targeted therapy is endocrine therapy (also known as hormone therapy), which is given to patients with hormone receptor-positive breast cancer. This can be given before surgery to shrink the tumor. It is also given after surgery for five to 10 years to prevent a recurrence. Patients with the metastatic form of this disease are also given endocrine therapy to prevent disease progression.

While there are no targeted therapies for triple-negative breast cancer, researchers are studying the disease to identify possible drug targets.

Chemotherapy
Chemotherapy uses powerful drugs to directly kill cancer cells, control their growth or relieve pain. It is often given to patients before surgery to shrink the tumor and simplify the procedure. Breast cancer patients can receive chemotherapy either orally or intravenously.

The High-Risk Breast Cancer Screening and Genetics Clinic provides breast cancer screening, chemoprevention, and genetic risk evaluation for individuals at increased risk of breast cancer due to personal risk factors and abnormal findings such as atypical ductal hyperplasia (ADH), atypical lobular hyperplasia (ALH), ductal carcinoma in situ (DCIS), lobular carcinoma in situ (LCIS), a family history of breast cancer, or the identification of a genetic mutation such as BRCA1 or BRCA2.

Our multidisciplinary team is comprised of specially trained genetic counselors and physicians work together to provide education, hereditary cancer risk assessment, genetic counseling and testing, individualized cancer screening and prevention programs to people who are concerned about their personal and family history of breast cancer.

Patients with any of the following risk factors may also consider referral:

Patients or Physicians can complete a referral to request an appointment here.

Between 5% to 10% of all cancers are linked to genes that are inherited from parents.

If you are worried about a pattern of cancer found in your family history, our staff is available to discuss whether genetic counseling and testing might be a good option for you.

If you are considering genetic testing, call the Broward Health Medical Center Cancer Center at 954.355.4917.

Over 2,100 women screened and 100 identified to have cancer.

Visit the Broward Health Foundation’s website at www.browardhealthfoundation.org, where you’ll find these and other opportunities to help.

The Lisa Boccard Breast Cancer Fund was founded in 2003 by Vincent and Terry Boccard in support of Vincent's sister Lisa and her fight with breast cancer. The mission of the Lisa Boccard Breast Cancer Fund is to provide funding for care that may otherwise be unattainable, for the women in our community to obtain screening mammograms and breast treatments if necessary. A women’s ability to receive a free breast treatment is not conditioned on her ordering any other item or service from Broward Health, or its Medical Staff.

The Lisa Boccard Fund has been fortunate over the years to benefit from many Community Partners. This has allowed us to screen over 2000 women of which over 90 have been identified with breast cancer. These women have received treatment and thankfully are still alive today. Together with our many partners, we hope to continue to educate, treat and heal many more women in our community.

To be eligible, women must be Broward County residents. Each situation is assessed individually and eligibility depends on income and/or lack of insurance. Contact the Women's Diagnostic & Wellness Center at 954-346-5722 and mention the Lisa Boccard Breast Cancer Fund to make an appointment or for more information.

Services are provided at the Women's Diagnostic & Wellness Center at Broward Health Coral Springs. Our Center is composed of a highly experienced team of technologists and radiologists sensitive to a woman's needs. We offer the latest technology with a full-field digital mammography system. This new technology enables radiologists to detect and characterize suspicious or obscure lesions more precisely. For high risk patients, breast MRI is available to detect miniscule breast cancers that mammography or breast exams might miss.

We are very proud to be able to say that 100% of all donations go into the Fund to provide screenings and treatment to the women in our community.

The Enlightened Women's Club is a program started on behalf of the Broward Health Coral Springs Women's Diagnostic and Wellness Center.

Here at the Center, we are dedicated to your health and well-being and are pleased to offer you the following membership benefits:

For more information call 954-344-3344 or email our Community Education Center. 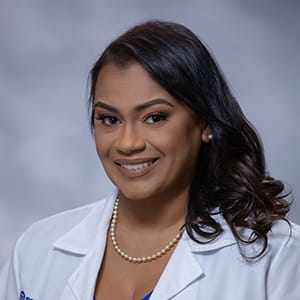 Alia Abdulla, DO, FACS, a fellowship-trained Surgical Oncologist, has practiced medicine since 2007. Dr. Abdulla graduated in 2002 from the University of Miami with a Bachelor of Science degree with honors in Biology. She received a Clinical Research Training Award from the National Institutes of Health in 2002 to perform research in the National Cancer Institute. In 2007, she received her medical degree from Nova Southeastern University in Davie, Florida. She completed her residency training in General Surgery at the University of Medicine and Dentistry of New Jersey in New Jersey where she served as chief resident, graduating in 2012. She received multiple awards including the Frederick G. Meoli Scientific Paper Award and the Elmer Grimes Memorial Award. She completed a fellowship in Complex General Surgical Oncology at Fox Chase Cancer Center/Temple University School of Medicine in Philadelphia, Pennsylvania in 2014 where she served as a chief fellow during her second year.